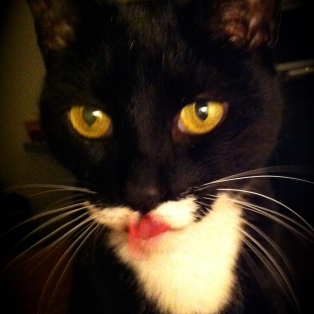 it’s been awhile since I had a word in this. You might think it’s all easy-peasy and great retirement home for dear old me, but there are those days when I just feel like curling up and not ever ever getting up again.

When we are at anchor we also never sit still, but that movement is normally so conducive to my daily nap routine, I don’t complain. When a cushion gets warmed up for me and left for a second I squeeze in and claim that spot so fast, that sometimes I get almost sat on because the human dares to try claim it back. At night, I feel more energetic, and go for my stroll around the boat. There is a nice little ladder in the one aft cabin, where I can climb up and out a little hatch (window) and walk around the boat. I used to jog up and down, but hey, I’m getting older and I think it was waking up my servant. But now I found another way – instead of climbing down the same way, I go peak through the other hatch and slowly move forward until I can’t hold my balance and land with a thud, sometimes on the mattress, sometimes on my owner – somehow she is not all that pleased, as she or blankets get scratched a little in the process. I’m also not as light as I used to be….but then I cuddle up in her arm and lie a paw on her, look at her lovingly, so she just has to forgive me.

At sea, it is a different story. I can’t tell yet what movement, but light rolling is not my favourite, in rougher weather it’s sometimes not so bad. I can’t eat and drink for a few hours, but it helps when I do get sick, I am hungry pretty soon afterwards and it’s all fine – apparently a lot of humans feel the same. After one day, I’ve always been fine and even dared to sit outside in stormy weather – until I get pushed inside again, as my owner is much more scared than I…me thinks….I’ve got a lot of hiding places and cushions are scattered so I don’t get thrown around a lot.  My owner just irritates me at times, laughing uncontrollably as I sit up and look at her or try walking on that slippery floor while the boat is moving left and right, up and down – it’s not that easy! At least I’ve got 4 paws to balance. 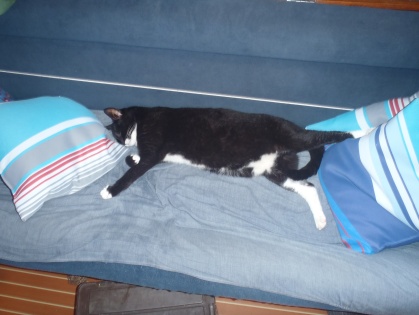 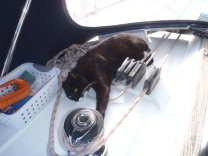 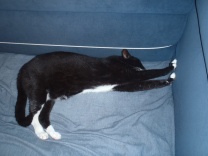 The food is ok, I grew up on that good dry stuff, but can’t get it always and my owner tried the supermarket versions…boy, did I get constipated and even got a bladder infection – not for me! Well there is a lot you can read up on it and what they put into this sh….. When I hear the can opener from somewhere on the boat, I dash in and look so longingly, she must just give me something. Alas, it’s not always for me, but tuna, mackerel, chicken or ham has to be given to me first, otherwise she won’t hear the end of it.  And if it’s fresh, even more so. She should really learn how to fish, flying fish are good, but not plenty enough! Normally there is a pot of gras growing, (not the smoking type), which I can nibble and then spit out at carefully selected times – it sounds like I’m really chocking on the stuff, and then comes out this slimy mess, but that’s what we do.o

Humans are always interested on how I do my daily ablutions or it must be a sailor’s thing. No bucket on this boat, my owner uses this room and I’ve got a box in a box which contains cat litter. She tried various things before, from sand, to washable cat litter (can’t get that lovely urine smell out ever!) and even marbles…well she lost those….I refused point blank. I love sand though – I can keep it on my paws for awhile and spread it all over the boat, but she mumbled something about the bilge pumps clogging up….

Hope you understand me a little more now – 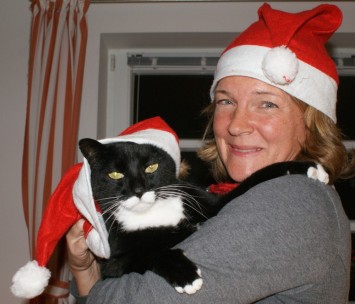 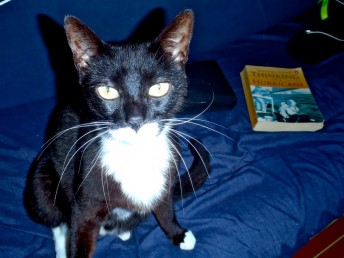 Thinking up a Hurricane